A buyers guide to Tesla

Before you buy a Tesla of any description, we thought we'd cover a few basics on owning an EV and the way Tesla do things. The ownership experience of a Tesla is likely to be very different to what you are used to, something that you must understand before taking the plunge as failing to do so may result in either a euphoric experience or the biggest mistake you may ever make.

Many Tesla owners can be overly enthusiastic about the cars and often don't take the time to listen to genuine concerns and questions potential owners may have and simply assert that the cars can do it all. We know of owner scenarios where the cars just won't work at the moment for them, but that's not to say it won't work for most people and the issues are usually linked to unusual patterns of use or frequent travel to specific areas, usually remote, where charging options are limited. Some can get around these problems, but for the buyer it is important to recognise the few limitations there are. A secondary factor is cost, and while there are savings, extensive public charging is not cheap and depreciation can be very variable.

This web site tries to take an impartial and balanced view of the good and the bad and let the reader decide.

The summary of this page is that Tesla do things differently to other car manufacturers and it is important that potential buyers understand the limitations and do some research. We'd also be a little wary of other owners who can be overly enthusiastic without spending time to give a balanced perspective and to reflect on your situation and specific needs and thrust a referral code on you.

The cars themselves are generally regarded as great, but not without problems, the claims and promises that are often delayed, the software which can be buggy, and the company's ability to deal with customer issues especially if they are not straight forward is sometimes lacking.

It’s worth mentioning the Tesla sales process and sales force. Tesla are renowned for doing things differently and they claim they don't have a traditional sales staff. Even if you buy in store, you are pretty much sat down at a web browser as if ordering on-line. This has some benefits (no pushy sales folk) but also a downside as their motivation and attention to detail can be a little vague, not helped by Tesla’s own ambiguity at times. Details of changes to the cars occur and the sales staff rarely seem to know before the public, or even what some of the changes mean. This can carry through once you have placed your order as delivery dates can move around and finance agreements and trade-in values seem inconsistently managed. There have also been reports of misleading statements over range and what you can reasonably expect to get from the cars, often through ignorance of the Tesla staff rather than anything else.

Tesla are also primarily a new car operation, and while they do have a limited number of used cars for sale, these are not generally available to see or drive before purchase. Buyers may get some pictures of the car, the cars will have minimal preparation done to them and the time-scales from order to delivery can be several weeks. 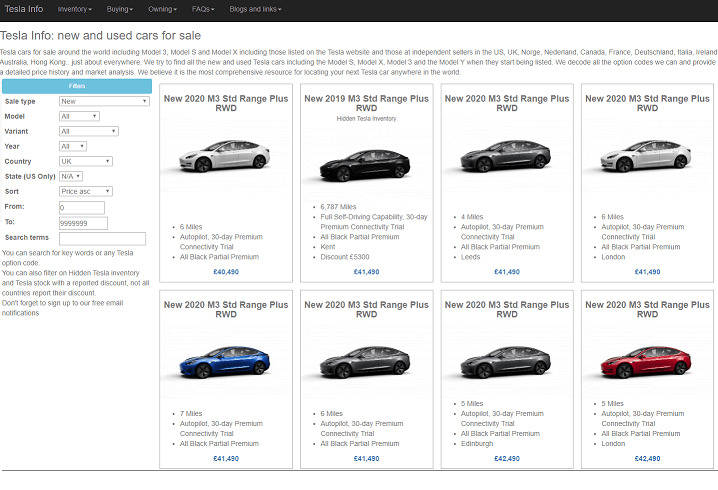 This is a very mixed topic and context is everything. Many owners who have had their cars a number of years experienced low depreciation although this has changed over the last few years. Model 3 cars depreciated relatively slowly after first launch with depreciation only really starting to appear approx 18 months after they were launched in a particular country. Owners will report this low depreciation, but as we saw with the Model S and Model X, depreciation does eventually occur. Model S and Model X owners from 3-4 years ago benefited from increasing new car prices, and while their car did not depreciate much, the cost to change to the equivalent new model todat is quite significant.

To help, we provide a market history plot for each model and you can form your own opinion. A glance at a MS P100D from 2016 or 2017 shows how steep the depreciation can be losing $/£70k over 4 years. Tesla list a lot of inventory stock and these range from delivery mile cars to ex-demonstrators, both sometimes with discounts. Tesla won't otherwise negotiate on price. Occasionally you may find a discounted car advertised but this is usually an ex demo car or an older model and the advertised price is still the price you pay. Tesla have now also introduced model year changes and the 2021 Model 3 had a number of significant updates which has resulted in 2020 spec cars being discounted to sell and has generally pushed down the value of used cars.

Check out our Tesla inventory pages as we offer more search features than Tesla and combined both Tesla and 3rd party listings.
We provide comprehensive details for each car including an assessment of the market, the price history of that car and the depreciation curve for that model/year.

Driving a Tesla is a different experience, and while other EV cars have similar traits, the performance of Teslas is still rarely matched. Some of the technology is similar to that of other cars, like doors unlocking automatically, but in places it's been taken to another level. You walk up, the door handles present themselves, on some cars the doors even open automatically for you, you get in, you put it in drive, you move away. No ignition, no "on" switch, no handbrake, no noise. And then the driving is just so smooth and responsive. Floor it, and the horizon approaches very quickly.

That said the cars, like most EVs, are relatively heavy and while quick off the mark they can suffer at higher speeds and around corners for an otherwise "fast" cars. The Model 3 is relatively nimble and the performance version is often compared to mid-size sports cars like the BMW M4, however we feel the MS and MX are now starting to feel dated and heavy and the Raven suspension update has only partly addressed this. In essence the bigger Tesla cars are great in a straight line but they cannot really be classed as drivers cars.

So it's perfect!? The sat nav, while looking impressive, can be temperamental and misses some basic features such as waypoints and alternative route options. There is no option to switch to Waze or another 3rd party sat navs, Apple Carplay and AndroidAuto are not available. Despite all the cameras, there is no 360 degree view when parking. There is also the reliability of the technology. At times the screens can just crash or become sluggish and require a reboot, autopilot suffers from a variety of issues, some of which can be dangerous such as random braking and Tesla still claim its work in progress.

The interior is minimalist which some people love, but it is also relatively low on quality compared to premium cars of this price bracket like Audi, BMW and Porsche. However, one person's minimalist design is another person's lack of detail and no doubt any prospective buyer will have sat in the car to form their own opinion. For us its the smaller details, look at the design of rubber seals around the door and how stable they are, the sound when you close a door, design of the seats including lateral support.

There are also some misconceptions on how high tech the car is. There are many unique or advanced features in the design: Autopilot, the self-presenting doors, the drive-train, the availability and speed of superchargers but each of these things are being slowly addressed by the competition. There are however some noticeable absences: there is no head up display, the adaptive headlights are a long way behind the best from BMW, Audi and Mercedes, there is no surround view when parking. Autopilot is also a mixed experience in its performance, functionally it's being extended constantly but the reliability of the functions can be hit and miss, and we are still doubtful of its ability to achieve full, hands and mind off, self driving in the foreseeable future.

But let's put this into perspective, the reality is the car is very different to what you may be useful. While there are plenty of things to delight a new owner, there will be some basic features that will surprise the buyer with their absence. The questions buyers need to do is balance the positives against the negatives, but probably more importantly evaluate what those are and whether they matter. Tesla is not the best of the automotive world, but its still probably the best of the EV world.

Tesla use an mobile app to schedule service and while this can be convenient, the ability to talk to somebody in service is not something that is easy to do. Tesla also handle routine maintenance and warranty matters well when they are straight forward, however if your problem is not straight forward or there is a looming significant design defect issue, Tesla can also go into a denial mode. There have been issues with older cars regarding charging speed, battery capacity and large screen failures which Tesla are pushing back even though its patently these are design defects. Owners have resorted taking Tesla to court and Tesla have been known to not even turn up to defend the case, and its only after many owners have suffered do they change their position. We feel forcing owners to go legal is at best a very poor organisational structure failing to respond better, and at worst a deliberate and cynical tactic to try and reduce warranty.

Most countries offer EV buyers some incentives, either a contribution to the purchase price, trax credits, use of high occupancy lanes, exempt from congestion charges, access to low polution zones, free parking etc. Check your country for the local benefits.

Fuel costs are cheap except when charging on some public chargers especially rapid chargers. Work on 1/4 of the kwh electricity cost per mile for the smaller more efficient cars and 1/3 for the bigger models. If you own a Model 3 and pay 12p per kwh, a mile costs roughly 12/4 or 3p per mile.