SAE International have defined 6 levels of driving autonomy which is widely becoming the standard way to think of Self driving maturity. While there may be some practical differences in the way laws are written the SAE standards offer a good, high-level insight into the challenges each level brings. We look at them, discuss the cars and systems that fall into each bracket, and assess where Tesla sits, both now and in the near future.

SAE International have broken down the maturity of driver assist and self-driving capabilities into 6 levels, level 0 being effectively no more than passive safety systems, through to level 5 where the car can drive in all conditions and at all times to the same extent as a human driver.

The grading system doesn't focus specifically on feature count, it reflects more on how the share of driving accountability is split between the car and the driver, and importantly how the transition from one to the other occurs. This is an important distinction, and one which is material to law makers and regulators. It introduces a new component which is largely overlooked by Tesla, namely how the transition from the car to the driver and back needs to be managed over time, rather than an instantaneous hand back. 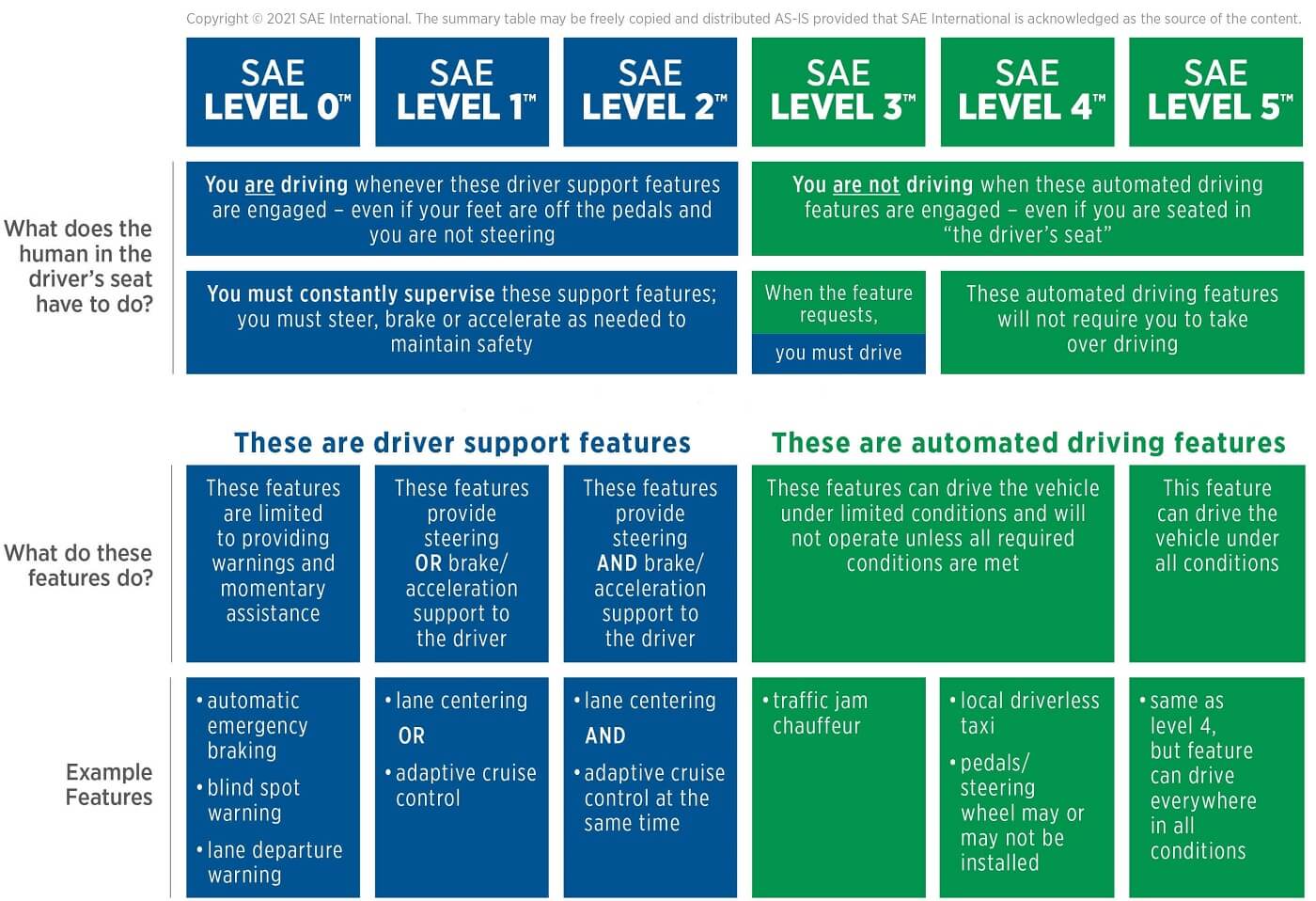 Accountability and Responsibility are words often used in this context and can cause some confusion.

We're going to use Accountable for the entity that is in charge and legally on the hook if things go wrong, either the driver or the car systems. Responsible is a word sometimes used to express this, but this can be conflated with who is doing the driving. There is a well-known acronym, RACI, which defines Responsibility, Accountability, Consult and Inform. When applied to these systems, 'Responsible' could be the person or system performing the task, whereas 'Accountable' is the person or system accountable for the task to be done correctly. We will use Accountable for who legally ensures the task is done, and Responsible for who does the task.

These levels do vary between themselves in feature count, but not in accountability. These are essentially driver assist aids. The driver is still always accountable, constantly monitoring the road and cars driving and be ready to immediately override any system should it deviate unacceptably from how the driver would like.

The difference between the two is down to the number of features, level 1 being a single feature, typically adaptive cruise (speed) control, and has been available in cars for many years whereas Level 2 is more than 1 feature, such as adaptive cruise control and lane keep. This has been available since 2015 when Tesla first enabled the Mobileye based Autopilot system which had both these features. It also had the ability to change lane and a simple forward and reverse summon feature. Parking assist systems have also been around for some time which can arguably also be classed as level 2 systems as they both steer and control the speed of the car into a parking bay, and some of these predate the Tesla autopilot system.

The key thing to appreciate is not the number of features on a level 2 system that matters, this can be quite large and the car could even do much of the driving duties, but whether the driver is always accountable for the actions. If so, the system is level 2.

It may seem counter intuitive but it is entirely possible to have a car that can be responsible for most of the driving duties but is not accountable in any way, in which case is still rated as a level 2 system, whereas a car which is only responsible for speed and lane keeping duties but is also accountable for ensuring those work correctly, plus they are all that is required is approved at level 3. This is where many supporters of Tesla FSD fail to understand the real difference between the two levels. i.e., the difference is not linked to feature account.

Legislation is starting to appear to approve Level 3 cars and two broad scenarios are emerging.

Both of these require the approved features to be highly reliable in themselves and not to abort unexpectedly. They are also able to understand when the limits of their accountability are being reached, and when to hand back accountability. However, it is where the handover is time critical which poses the biggest challenge as it is essentially saying you cannot just revert accountability to the driver in an instant.

The first of the two scenarios above has been seen in systems sometimes called traffic jam assist. This has now been approved for Mercedes and other makes are likely to follow fairly quickly.

The environment where the system is accountable is tightly defined, it is only on motorways and currently at relatively low speed. As soon as the road changes or the speeds increase, the car requests the driver to become accountable. In this scenario the driver has little to assimilate; the road type is well understood and flowing freely and as the accountability transition occurs the car is highly likely to be able to continue as before. An interesting aspect of this is the car may continue to be responsible for speed and lane keep after the transition of accountability as the transition is not necessarily one of tasks, but on who is accountable for them. In other words, using Tesla terminology, the car would remain on autopilot as the speed increases, the only change is the driver would need to acknowledge they are happy to resume accountability and the existing nags if the steering wheel is not held etc would start to apply.

Tesla could seek to get this level of approval and there may be some more detailed obligations to be met, but currently there is no evidence they are seeking to do so.

The general-purpose requirements recognise that a driver who is not accountable, is not paying attention. They may have their eyes off the road and will need some time from the point of notification to the point of assuming accountability to regain cognitive and possibly physical control. If the driver needed to be alert and monitoring the situation then the car is not accountable and the situation is level 2.

The minimum time for this transition is being discussed is between 7 and 10 seconds. To be clear, this is saying the car must remain accountable and therefore also responsible for driving safely for between 7 and 10 seconds after it has signalled to the driver that they will need to take over accountability. This is a very significant stipulation as the implications are:

The bar to achieve the general-purpose level 3 is difficult. Tesla are pushing forwards with the FSD programme in the USA and it is attempting to perform more and more tasks, including taking junctions and navigating across oncoming traffic. While these are all features the car could perform, i.e., be responsible for doing, we are doubtful that the accountability at level 3 will ever be granted. We don't believe general purpose level 3 will be possible beyond a fairly simple evolution of traffic jam assist type systems. Tesla are likely to miss out completely on Level 3 while their competitors will increasingly develop these systems.

Level 4 is a further advancement. Here the conditions that must be met for the car to be accountable are more predictable. This could be the type of road or the time of day, i.e., avoiding night time driving. It may also include certain weather conditions or traffic, but for the system to be activated, it must know where it will be driving and that it is capable of being accountable and responsible for driving that road for the foreseeable time. This is similar to level 3 driving, except instead of a 7 to 10 second notification, the car can predict exactly when its limits will be reached.

An example, and one we have previously written about, is driving on motorways/interstate highways/freeways for long periods of times. The environment is relatively well understood and predictable, the complexity of the driving is low with few complex junctions and often the traffic is all flowing in the same direction. The car could assess via the satnav how long they will remain on that road and only alert the driver to start preparing to take over as the end of that defined period is approached.

Initially this sounds very similar to level 3, however the driver can be further removed from the driving situation.

Tesla may well be aiming for this level but the bar is pretty high. At present Tesla seem to be trying to have the full breadth of capability, but driving is currently only operating at level 2. At Level 4, the level where the driver is said to be 'minds off', the driver could be allowed to sleep for a short while, and this feels orders of magnitude more complex than where Tesla currently are. It's important here to understand that it is not the ability to attempt to drive that matters, the Tesla system could be capable and responsible for driving coast to coast, it is satisfying everyone that the ability to perform that level of driving is sufficiently high, the car can also be made accountable for that driving. To do so, the car cannot disengage or fail in any of the driving tasks.

Level 5 is the easiest of all to understand, the car can simply drive itself without a human being present. This is the utopian goal that would enable robotaxi, but it is also the hardest to obtain without transitioning through the other levels.

Without a driver there are scenarios however where driving reaches a stalemate. Two Tesla's approaching each other on a single-track road, both being followed by other cars. When they meet, they both stop and neither are able to resolve the situation. That is not a scenario that can be allowed to happen.

There are implications when the car is accountable. Insurance, dealing with the police should the car be involved in an accident, liability for speeding tickets or other driving offences such as entering a zone where the car is not allowed.

Even in use it may be a requirement for the car to indicate where the accountability lies. In many countries using a mobile phone while driving is illegal. A passing police officer would need to know if the driver was accountable or was effectively just a passenger at that time with the car being accountable. These details, and many more, need to be worked through, either with practical alterations to the car such as a visible status light, or laws changed and reworked. Again, nothing in this area seems to be in progress with Tesla.

Our belief is the following stages will occur to self-driving: