A common concern for Tesla owners is how to calculate the battery degradation or establish the health of the battery as it's not that easy. This is a guide to talk you through how to take the numbers the Tesla is reporting, turn these into a max usable kwh capacity information for the car and then compare these to the figures you should expect to see for a new battery.

The following is best done at the end of a drive when the battery is warm and factors such as vampire drain and cooling of the battery have not had chance to influence the results.

It is also worth noting that day to day, the battery management system can drift depending on how the car is used with respect to charging. This drift is fairly negligible on a Model s and Model X but can be more significant on a Model 3 and Model Y. Check out our Guide to Tesla BMS calibration to the nature of the issue and how it can be resolved if you suspect it is needed.

Please note: the latest Model S and Model X since the 2021 facelift do not include the information available to perform the calculation within the car. We have created a Battery capacity calculator tool that can get information via the API that will calculate the battery capacity for you. 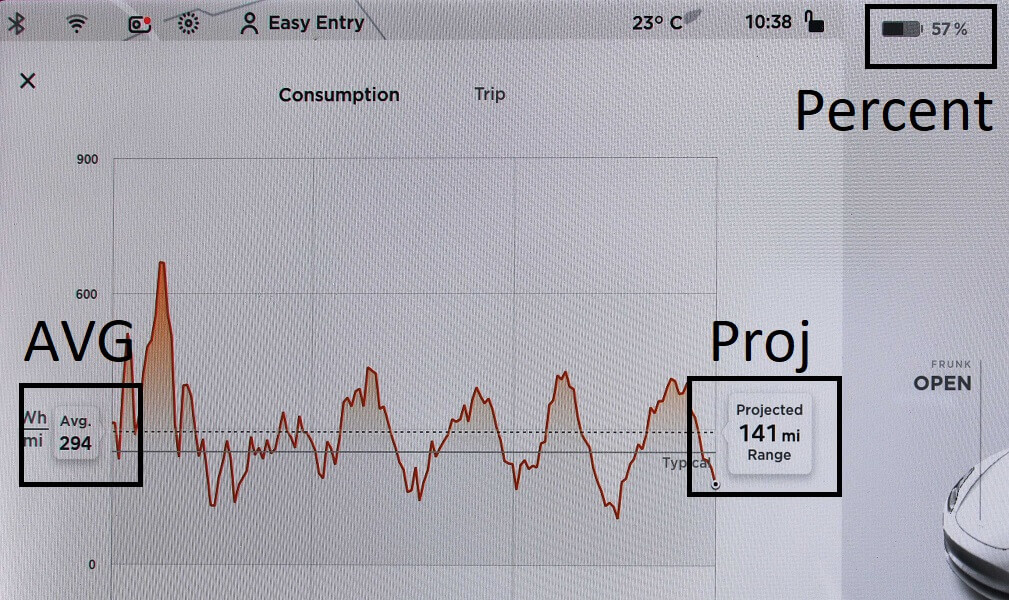 To calculate the available battery capacity you need three pieces of information which are easily accessible from the energy screen. If you are not showing % at the top of the screen, this can be changed via the Display options through the menus. This is also best done when the car has just finished a journey and not when the battery is cold and or vampire drain may have occured as this can decrease the battery capacity artificially.

The AVG consumption, the Projected range and the Percent

The BMS has calculated the range it can achieve based on the recent driving history which is reflected in the Average consumption figure. Multiplying these 2 together gives a figure, which when divided by 1000, equates to the number of driver available kwh in the battery at the current state of charge. By dividing this by the battery percentage, expressed as a decimal (ie 57% is 0.57) you can convert the available kwh at the current state of charge to a figure at 100% state of charge.

In the example given we have :

To convert to the battery capacity,divide by the percentage as a decimal:

The example is from a Model 3 Long Range with a BT37 battery and shows negligible degradation. Which is good news as it's our car!

Once you've worked out the figure above, you can compare it to the usable capacity figures in the table below. The figures below are from various sources on the internet and are the theoretical limits, sometimes worked out by reverse engineering the battery management system and sometimes by tearing down the battery packs. In practice, and for a number of reasons, you can expect your car to be below these figures with 5% and more quite normal, even when new as explained below.

Tesla have applied a model 3 warranty limit of 70% retained/30% degradation after 8 years/120k miles/180km to be acceptable. They have not stated a figure for the MS or MX. Superficially it's therefore not unreasonable to assume a 10-15% degradation after 4 years is within spec, however degradation is not linear. Reports suggest there is an initial drop within the first few months and then the rate of degeneration tails off. A typical scenario is therefore a 5% drop fairly quickly and then a further 5% drop over the life of the car. If your car has between 5% and 10% degradation, a higher figure on older cars, it's quite normal. If the figure is above that, for instance the car is an 85 and have been hit by #batterygate, then react accordingly if buying or if you are an owner then consider challenging Tesla and get the issue logged if in warranty.

Please email us if you find figures that are significantly different using the approach as this guide is provided based on community sourced information.

The above calculates the available battery capacity. Range however will vary quite considerably over the course of the year due to a number of factors, most noticeably from a seasonable perspective, due to weather. When the temperature starts to fall below 10 deg c/50f there is increased demand to heat the cabin and battery, both through heaters and higher internal resistance of the battery, which consumes significantly more energy at the beginning of a journey. This is normal.