Tesla and the path to full self-driving value (2023 update)

We first wrote this article in June 2019, now nearly 4 years ago. We updated it 2 years ago. Both times Tesla were on the verge of a breakthrough, Musk was talking up feature complete by the end of the year, full self-driving was just over the horizon, and here we are four years later with a distinct feeling of Deja-vu. Things have changed, the city streets beta is in the US and Canada and up to a point it looks impressive. But it's only city streets. Tesla Vision (TV) is now in all cars barring the earliest Mobileye cars, and even those with Radar no longer use it. Tesla have even doubled down on TV removing parking sensors from cars with the promise that cameras can do it all.

But is it? News broke at the end of 2022 where Tesla seemed to be filing to keep news on a new radar quiet for now, design documents for the Model S seemed to include a new radar housing. So is Radar due to return, and if so, is this for Autopilot or for passive safety?

2022 saw other changes. Tesla stopped reporting safety statistics. They'd previously stopped reporting the passive safety, and now all stats. One can only presume that the trend was not good otherwise why give up on virtuous promotion of the fact? To see our view on the Tesla safety statistics while they produced them, see our report: Tesla safety report and the need for caution which pretty much puts numbers on the improvements or recent lack of. We actually highlighted the reason why they were good was partly linked to the demographic of the early adopters. With the Model 3 and Model Y changing that demographic it wouldn’t be unreasonable to expect the figures to get worse, so we stand by that analysis.

If we look back to 2 years ago, Elon Musk had tweeted a couple of interesting points: firstly, he was admitting that he'd been optimistic in his timescale estimates. Secondly, he'd admitted that driving is a harder problem than he thought and the real world have an infinite number of edge cases. Maybe those two points are effectively one and the same. Over the last 2 years the FSD City street beta does give some cause for optimism, but we're still not convinced about level 3 and upwards, and we'll set out why.

Tesla still haven’t declared any level 3 or above mileage. Everything has been level 2. There's some confusion with many people about what level 3 and above really means. We maintained our position that there are two key things to consider: who/what is doing the driving, and who/what is accountable for the driving. We're avoiding the word responsible as it has various connotations which differ amongst the audience. The key point here, is the car can do all the acts of driving, as the FSDb demonstrates in many drives, but at no point is it accountable for that drive. Equally, a car may be able to only drive in some tightly defined conditions, freeways or motorways, and not in many other situations, but is accountable in those specific situations. The distinction is important as Level 3 is a shift in "accountability", and not a measure of the feature count. And we've long argued, the utility from autopilot will significantly change when the accountability changes.

We've seen the need to change AP hardware a number of times since inception. We're doubtful the current sensor suite is sufficient. Camera resolution is not that high, Tesla are already pixel peeping to get the most out of it, and given the compute power was wrong a number of times, why should we have confidence in the sensor suite being sufficient? It's also not just about the potential capability, it's about failure scenarios.

The combination of these factors makes us think that the obligation for level 3 and above driving which is to be able to predict when it needs to hand back to the driver, and manage that controlled hand back over time is going to be difficult to achieve. Failures in the sensor suite to be able to provide the necessary information could be quick.

What do Tesla actually mean by FSD?

Tesla talk about FSD without particularly explaining what they mean. Is this level 4 driving where the car can drive for significant parts of the journey with the driver being "mind off", or the full level 5 robotaxi version?

If you pick the FSD option when ordering it just adds Traffic light and stop light control with the promise of autosteer on city streets in the future. This is level 2 autonomy.

Previously Tesla have said FSD will let you get in the car and it will drive you to wherever you want to go with minimal intervention.

Musk has claimed that buying FSD now will allow your car to become a robotaxi in the future and go out unsupervised.

Lets also take a look at some of the other challenges before they can achieve any automated driving (as opposed to advanced driver assist where the driver is still responsible):

Therefore, in our opinion, level 5 full self-driving (driverless cars), is simply not plausible with the current cars and for many years, at realistically would require level 4 driving to be in place to learn these edge cases and how to deal with them.

So where's the path to value?

The value is the selective targeting of level 3 driving, followed by level 4.

Rather than focus on the feature set for all areas of driving and chasing a goal that is thwarted with issues, we believe that Tesla should take a different approach. Their current development road map appears to be trying to enable the car to autonomously drive in an ever increasing percentage of situations, but rather than achieve 95% ability on 100% of roads, with driver intervention when it fails (level 2) we believe they would be better by focusing on 100% of the required ability on 50% of the roads.

So what does that look like? If we consider the hardest road conditions to drive on, they're urban situations. Parked cars, pedestrians, turning across traffic, stop signs and lights, merging onto roundabouts, single lane roads where you need to yield for oncoming traffic. The list goes on. These are not trivial issues and the penalty for getting it wrong can be very high. Tesla are doing a good job with the FSDb suite, but will the sensor shortcomings enable it to be enabled when a failure driving past a school and the driver not engaged in the drive to save the day would be catastrophic. 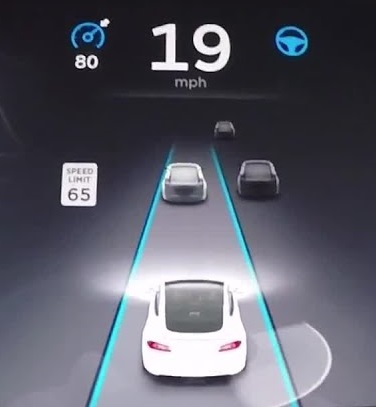 But there is a class of road where many of these risks are not present, and they're also roads where drivers spend several hours in boredom. Freeways, Motorways, Autobahns, The main trunk roads across countries. Autopilot is already incredibly close to addressing these roads in their entirety, Tesla could divert ALL resources into completing the job and getting approval for level 3 or even level 4 autonomy on such road types. To do so they need to resolve the following challenges, which they need to solve regardless of approach, we are just changing the priority:

If they crack this scenario such that a driver can drive the first mile or 2 to the interstate and then settle back and work on their laptop for 2 hours while the car drives, and then takes back control, it would be the first truly autonomous, publicly accessible feature offering "mind off" driving. Tesla can then extend their footprint from this base to other road types.

This is less about feature complete of all features, but execution poor, it’s about feature perfected for the subset of features required for a specific road type. Get one road type cracked and the rest will eventually follow. There is a related benefit to this approach too. The human behaviour aspects of driver aids such as the current implementation of autopilot means it is increasingly abused by drivers. Liberties can be taken, and the driver often gets away with them, and the better the system becomes the less prepared many drivers will be to intervene when the need arises. To move to a lower standard of AP on inappropriate roads, and a higher standard on selected roads, together with the development of better understanding and assessment of the driver’s ability to resume control will lead to a reduction in the number of accidents from driver abuse.

The approach we believe that will give both motorists and shareholders value is therefore narrow the scope and execute completely, this will be quicker to market and safer for all. As its purely a subset of the overall vision it can't be slower, but the first to market with the approvals to use it in a public setting will set the precedent, take the first mover advantage and in turn boost product sales, the value of FSD, the reputation and, if Musk’s claims of wanting to the safest, the greatest of all value, fewer road fatalities and serious injuries.