If you're a little confused and bemused by all this then you are not the only ones. A relatively simple thing has become very complex with multiple permutations and with changing dates, but it boils down to some quite simple basics on a given car, indicated by the option code:

Just to add a little extra interest, Tesla has also offered unlimited free supercharging but for a fixed duration, usually 6 months, or in the case of cars delivered at the end of 2020, 12 months.

So which option does my car have?

There are a number of ways to tell what your car has:

Ask Tesla which is not particularly practical at the moment with service centres not having a phone line.

From here you can see the Supercharging code, in the example above it is SC04.

From here you can see the Supercharging code, in the example above it is SC04.

Do I have free supercharging on my Tesla?

This is partly covered above, however there are other indicators if you don't have access to MyTesla. Unfortunately it's easier to tell when a car definitely does not have transferable free supercharging than it is to confirm the car does:

The status codes can also be found by using the guide above.

Does the car I want to buy have free supercharging?

If the car is being sold by Tesla then the Tesla listing will tell you. We go one step further and break down all the option codes on our inventory listing site so it may be worth finding the car on our site to find out whether the charging is transferable or not.

If you are looking at a car privately or froma dealer and do not have easy access to the option codes you can determine if the car has transferable charging by looking at the charging screen and follow the steps below: 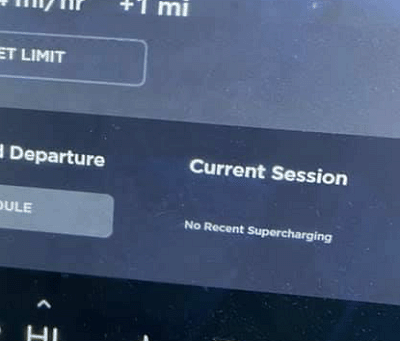 If buying from a dealer, we would always recommend you agree a condition of sale that the supercharging is transferable if the dealer is claiming it has. This is to cover the situation where they have bought the car from Tesla, Tesla have stripped supercharging but the car is still yet to be supercharged which would result in the "No recent supercharging" being displayed. Asking the dealer how they acquired the car is also worth doing. Cars bought directly from Tesla or via auction may have had supercharging stripped. A dealer will know how they acquired the car and should be willing to tell you.

If buying privately, we would suggest asking the seller to meet you at a supercharger if one is nearby and actually charging the car. This will also help confirm the no cost aspect and will also allow you to see how fast the car is charging.

Be wary of trade sales. Where a car has been returned to Tesla and Tesla have sold the car into trade either directly or via an auction, they are likely to remove free supercharging however it can take some time for this to be reflected. If buying from a dealer then ask where they sourced the car.

How much does it cost to supercharge?

The cost to charge at a supercharger in nearly all countries is based on the amount of electricity put into the car, measured in kwh. The price per kwh varies from charger to charger and in some locations can also vary by the time of the day. To see the price, locate the supercharger on the map in the car and look at the more information details. This also shows how many chargers are at the location, whether version 2 or version 3, and how many are free.

What is the difference between Version 2 and 3?

The original superchargers were installed in pairs, sharing between 125 and 150kw. The implications were when 2 cars were plugged in, each car might only have 75kw available to them resulting in slower charging speeds. For this reason, many suggest using alternate chargers.

The v3 chargers share capacity across the site, and have a maximum charging speed of 250kw. As a result, the newer cars such as the Model 3, can charge ignificantly faster on a v3 charger. Older cars which are limited to about 120kw, the faster charger makes no difference other than avoiding the issue with sharing a 150kw capacity.

One final difference, in some countries including the whole of Europe, the v2 chargers have 2 cables. One supports the older DC charging over type 2, and the other is a CCS connector. The v3 chargers are all CCS and the Model S and Model X that do not have a CCS socket in these countries need to have an adapter and the appropriate communications board fitted to the car which can be retrofit buy Tesla.

Why do I not get the charging rate I expect?

The cars charging is dictated by a number of factors and is limited by the slowest of them all. This may be:

How do I make it supercharge at its fastest?

If you want to maximise the supercharging speed, we recommend the following:

What are overstay charges?

Once you complete charging you should unplug and vacate the space. If you do not, and half or more of the bays are occupied Tesla will after a short grace period start to charge an overstay fee. This is charged even if you have free supercharging. This can also be more expensive than the charging actually cost.

I can not charge, it says payment issue?

You need to have a valid charge card on your Tesla account and all outstanding payments have been approved for payment. To do this you need to log into the web based Tesla account and check your charging history. This will also show any referral miles being used against charging sessions.

I don't own a Tesla, can I still supercharge?

In Europe, Tesla have opened up a mumber of supercharger locations to non Tesla cars with the CCS charge port. At these site, you can charge other makes of electric car, although you need to initiate the charge through the Tesla app. See our guide to supercharging a non Tesla for more information.

What is a V4 Supercharger?

Details of the next generation supercharger are starting to appear. These are physically larger, and are believed to be rated up to 325kw. The main difference however, is thought to be greater alignment to the CCS standard, although interestingly the 350kw rating of these is achieved by having 800V battery packs, twice that of the Tesla.