Your Tesla loses range when parked caused by something called "Vampire battery drain" or just "Vampire drain". This can vary from a few miles per day to quite significant amounts depending on the settings in the car and can be a problem if leaving your car while on holiday. This guide tells you how you can minimise Tesla vampire drain.

What is "Vampire Battery Drain"?

Your Tesla never completely goes to sleep. It contains lots of computer systems that do various functions from monitoring the health of the battery, listening to see if Tesla are trying to connect to the car over the air, being ready to open the doors when you walk up to the car or running Sentry Mode to record anybody approaching your car. The number of computer systems that are running when the car is parked depends on what you ask the car to do while away, and there is a trade off between the number of things being done and the amount of power consumed by the car.

Is it really an issue?

Most of the time the loss is relativity small over a short period of time and as many people plug in to charge over night they do not see the impact of vampire drain. Over the course of a year it can however add up and be quite a considerable amount of energy, Sentry Mode alone can consume over 500kwh per year, which can cost $200/£200 or more depending how much you pay for electricity.

The other situation where it is most noticeable is when leaving the car for more than a couple of days and not on charge. A typical example might be at an airport long stay car park when going off on a 2 week vacation or business trip. The wrong settings could mean the car loses over 2%-3% per day, and a 14 day trip can mean 50% battery loss.

While the HV battery will go into protection mode and certain systems and functions will automatically turn off with a low state of charge, the HV battery also supplies power to the low voltage battery. If this also becomes depleted then even opening the car will be a problem. Access to the low voltage battery is possible but not trivial, and while this battery can be boosted allowing the car to start charging the car will typically still need recovering to a suitable charger.

Tesla talk to the car via an API and many 3rd party developers have reverse engineered this and use it for alternative purposes. While the API has improved over the years, and well written applications will not wake up the car when not needed. Some apps are less well written, some even suggest sleep settings, we think these should be avoided as the API now has a specific wake command which should only be used if the car is asleep. As a result settings should not be required.

There are also some services that use the API to control charging. These are typically linked to either solar power at the home, or low cost electricity tarrifs. These query the car to see the state of charge at times when charging would be available at a cheap rate. To get this information they must wake the car to find the state of charge. Unfortunately, these apps do this even when the car is not plugged in, as a result they could be constantly waking up the car while you have left it in a car park.

As an aside, we do not recommend any 3rd party app that retains your any of your details or tokens. The Tesla security is not sufficient and the Multi Factor Security and Pin to Drive are generally bypassed if the Tokens are available to a 3rd party.

To minimise vampire drain, review all 3rd party access and if in doubt, change your Tesla password which will invalidate all third party apps and prevent them accessing your car.

The Tesla app also wakes the car. Avoided excessive use of the Tesla App as very time you open it you are starting up computers and increasing the drain on the battery. Owners sometimes like to check in on the car every few hours when on holiday especially if they are worried about the battery drain and this will just accelerate the vampire drain. The widget you find on some makes of phone will not however wake the car.

While in theory a great option, this is a simply dreadful option with respect to vampire drain. The car is kept in a high state of power consumption and is the single most important thing you should turn off to minimise battery drain when leaving the car for any length of time.

For owners of cars with EAP and FSD, there is a feature called summon available to you. This can have a standby mode enabled which will keep the car awake. This needs to be turned off. 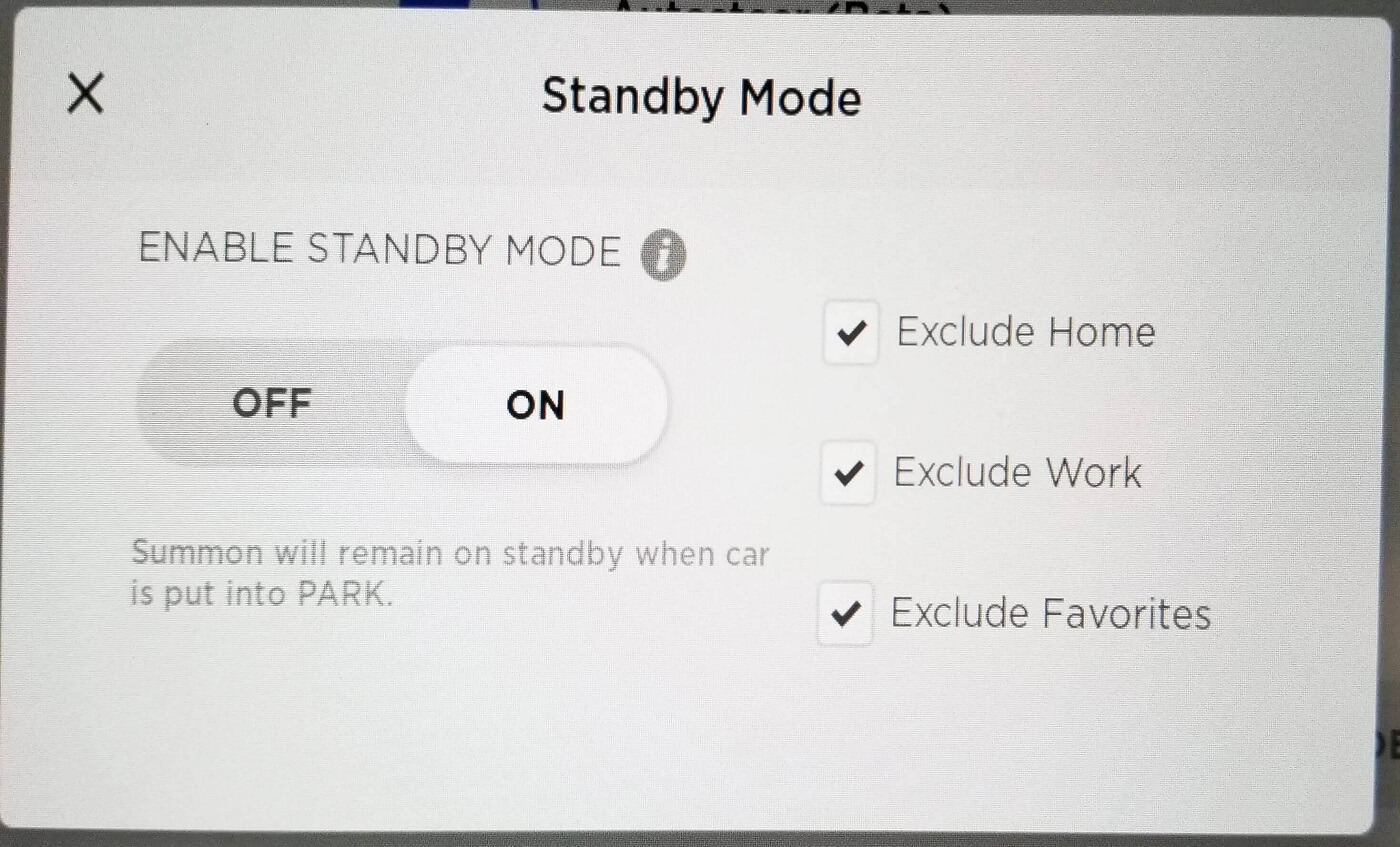 Within some older cars, usually Model S and Model X, there is a power management option for energy saving and "Always connected". The most efficient combination is Energy Saving = On and Always connected left unticked.

In day to day use, many leave Energy Saving off as this is still reasonably efficient.

Simply NEVER use Smart preconditioning if your car has it. It rarely works well and can result in the car heating itself up even when you have no intention of using it.

Dog mode, Camping mode etc all use energy from the battery, and while fine for short periods, they should be left off when leaving the car for any length of time.

You may have Cabin Overheat protection and we'd recommend turing this off too. It actually disengaged automatically after 12 hours but the car may still have consumed a lot of energy in that time.

Finally, turn off Scheduled Departure. This preconditions the car on a daily basis which consumes energy.

It has been known for the car to end up in a perculiar state following a software update which prevents the car from sleeping. If you notice the car not sleeping or having excessive drain after a software update, manually reboot the computer by holding down the scroll wheels.

Cars may also not sleep when they are downloading an update or new navigation maps. It is best to have the car connected to reasonably fast internet connection if possible as this reduces the time to download the update.