How to find out what options a Tesla has

Tesla don't have many options that owners can select today, but over the years there have been some significant changes to the hardware. This guide explains how to find out what options a Tesla has including FSD, MCU version and Raven. You can alo find out whether the car has a heat pump, air suspension and premium audio.

The easiest way to determine the majority of options a Tesla has is to be sitting in the driver’s seat. From there you can follow the following steps to determine what the car has and by understanding the displays, what the car doesn't have by a features absence in the list. The steps are broadly the same irrespective of the model.

The software version running in the car can make a difference, although any car running 2022.xx or later software should be fine.

If you are talking to a seller about a car, ask them for a photograph of the following two screens. We believe any dealer that really understands Tesla cars will know why you are asking, will have no problem in being able to take these pictures and will be confident in the description they have given you matches the cars data. If they are unwilling or unable to take these pictures without a good explanation, we suggest avoiding the seller. A good seller who understands Tesla will have already included pictures in their advert.

In multiple places including the app, the car and even on your web based Tesla account you will find a list of the car spec. This lists the basic configuration of the car including model, colour, wheels etc. This list is at the time of order, so any features that have been changed after delivery, for instance wheels, will not be recorded.

While this may list free supercharging, do not assume this will transfer if you are looking to buy the car. We explain more further down the page.

The warranty tab can also prove useful to establish dates. The warranty dates are 4 and 8 years after first registration which will be some time after the build date, so again, you can not assume that a car registered on a particular date will have some of the more hidden features, such as the heat pump, from this date. We help answer those additional questions below. 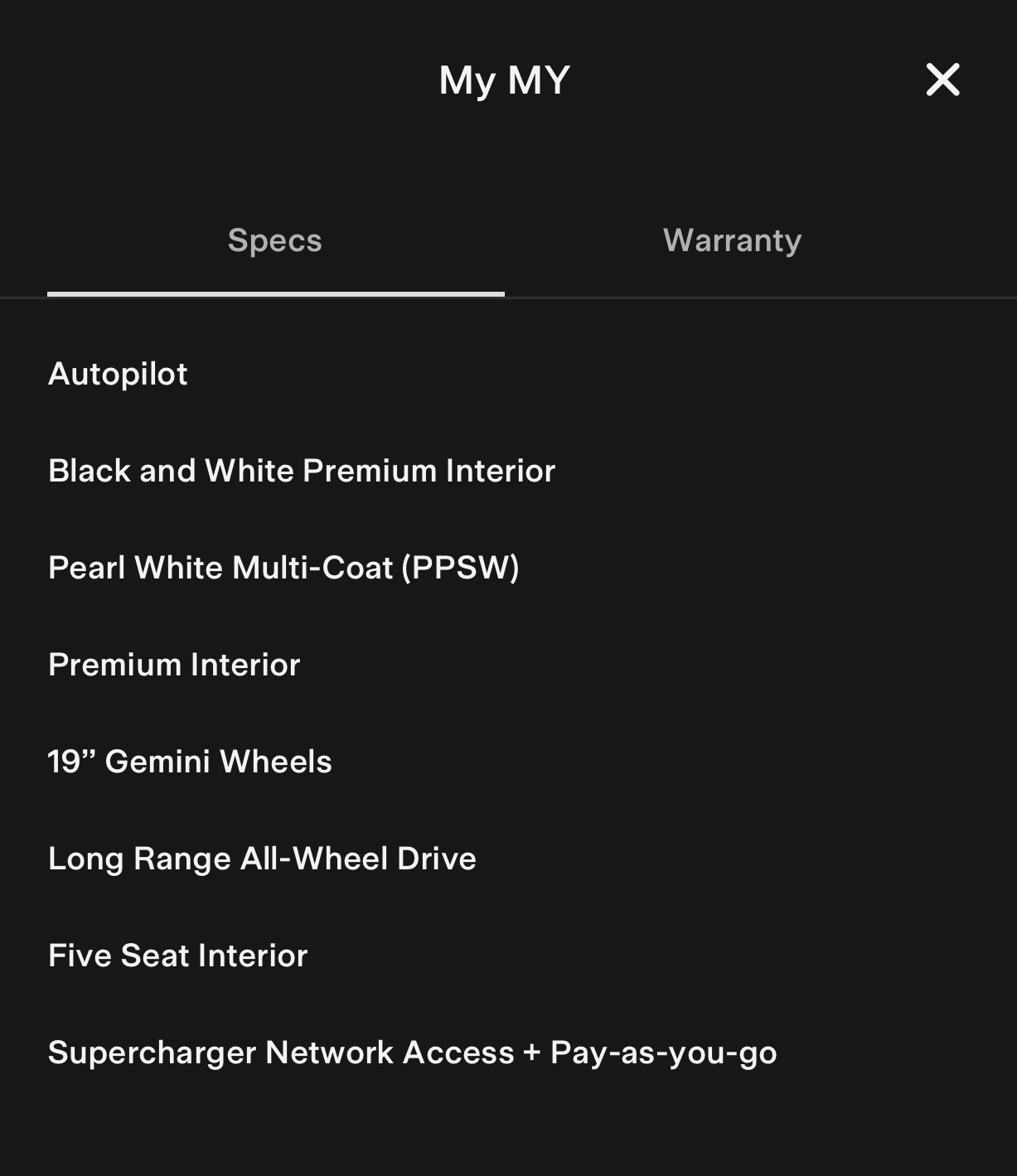 The first thing to do is to click on the car icon in the bottom right-hand corner. This will bring up a menu on the screen. On the right-hand side there are a list of options, the last of which is called "Software". Click this menu item and the display will list included packages from the following list: 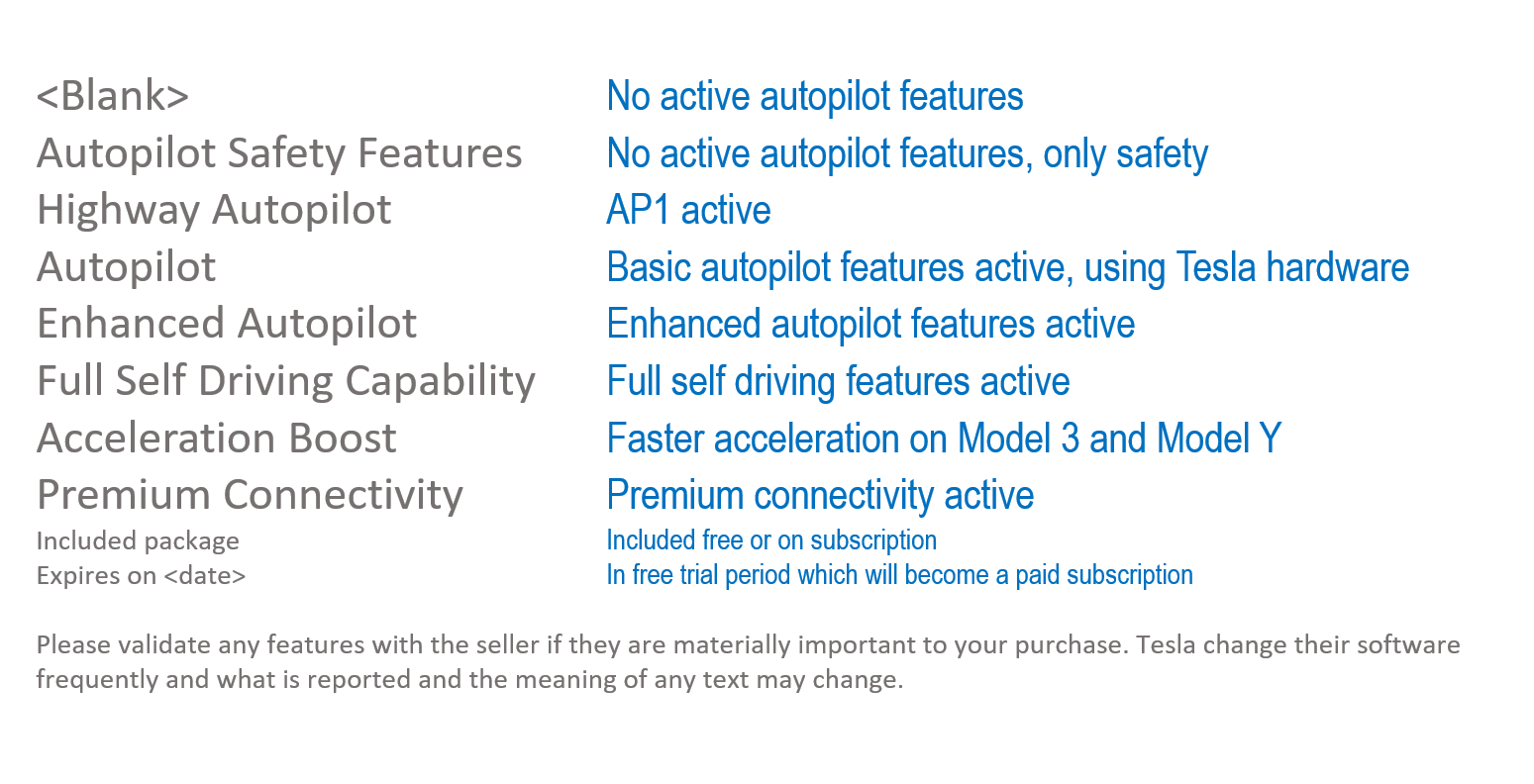 While the Software menu details the software options on the car, many owners and potential buyers also want to know more information about the actual hardware installed on the car as some features such as Sentry mode are dependent on the hardware installed. Pressing the "Additional vehicle information" option on the above screens will cause a pop up to be displayed with additional technical information. 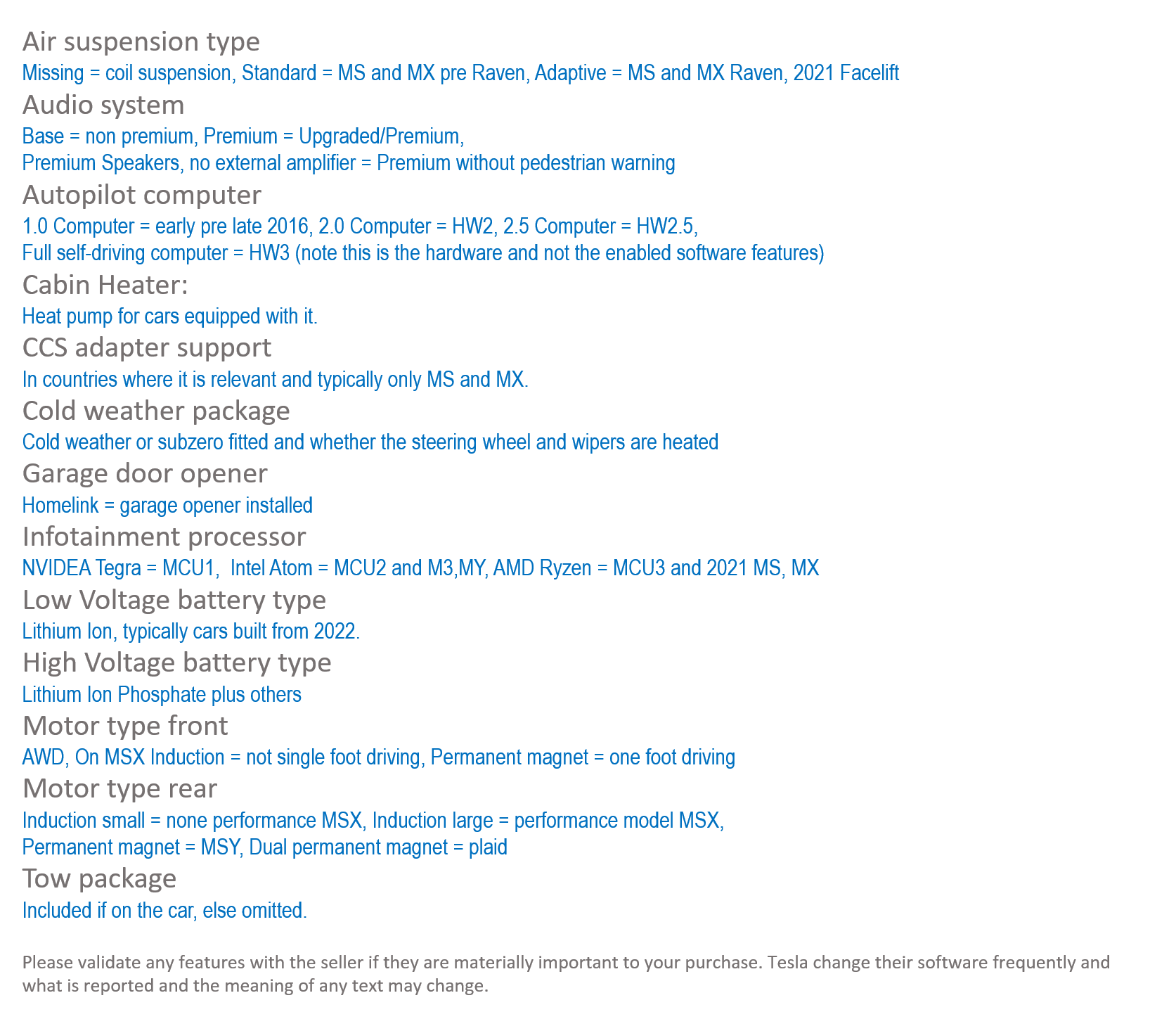 There are a number of other things you can quickly determine from screenshots of the car:

The Model S used to have an option for a panoramic sunroof. Some dealers call the all glass roof a panoramic roof which isn't strictly correct and can cause confusion. From the Quick controls menu page you will see a top down view of the car and the panoramic roof controls will be obvious as shown in the first picture but not the second. 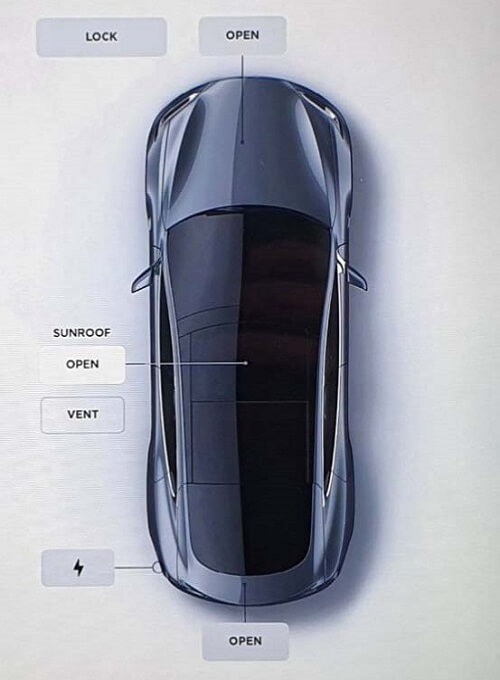 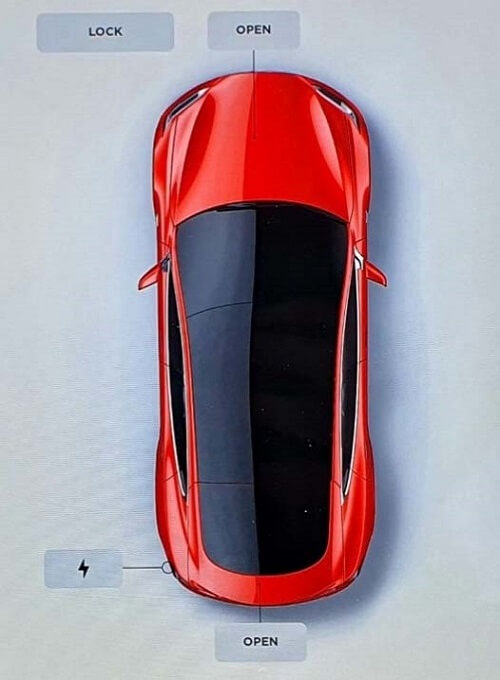 This is one of the hardest features to determine but generally free supercharging is not transferable even if the car currently has it unless the car was ordered by Jan 2017 and delivered by April 2017, and even if it was first registered between those dates, it still may not have free supercharging as Tesla may have subsequently removed it. For more information on this topic see guide to supercharging to determine what option you have.

The Model S and Model X can have different on-board chargers with a different max AC charge rate. Early, pre facelift Model S could have (in Europe at least) a second on-board charger increasing the maximum charge speed from 11kw to 22kw should the charge point support it. The facelift Model S and the Model X came with a new on-board charger that was limited to 11kw with an option to increase it to 17kw. To determine which the car has, call up the charging screen by pressing the lightning bolt at the top of the screen, if the max current says 16A the car is limited to 11kw, if it says 24A it has 17kw charging capability and if it says 32A it has 22KW charging capability.