Tesla ride comfort is a topic that often gets raised, both in good and bad terms. The Model Y in particular has been criticised for its suspension, but what about the Model S and Model X? These are the premium, top of the range Tesla's, so what's the story with their suspension?

Coil suspension was never available on the Model X, while it was offered when the configurator first opened, no cars were delivered with it.

The primary benefit today is the relative ease to repair and maintain a coil suspension. The air suspension options can be expensive once the car is out of warranty.

Air suspension is shock absorption system which use air filled bags to cushion the ride. The air is compressed in these bags, and by controlling the amount of pressure it is possible to raise or lower the height of the car.

Like many things at the time, the design of subsystem on the Tesla were going through a number of changes. In 2013 the dynamics were improved with improvements to the dampers, bushings and stabilizer bars. In 2014, the air suspension became "smart" with a height adjustment feature.

While the height of the suspension could be varied, the ride quality could not. A higher suspension setting could lead to a slightly bouncier ride, but that is more a by-product rather than the intent of the air suspension. Some talk about using a higher ride height over rutted or pot-holed roads. While this may be necessary for clearance purposes, there is no benefit from a softer or more compliant ride.

Both the Model S and Model X had the Smart air system until it was replaced in 2019 with the Adaptive Air suspension system. 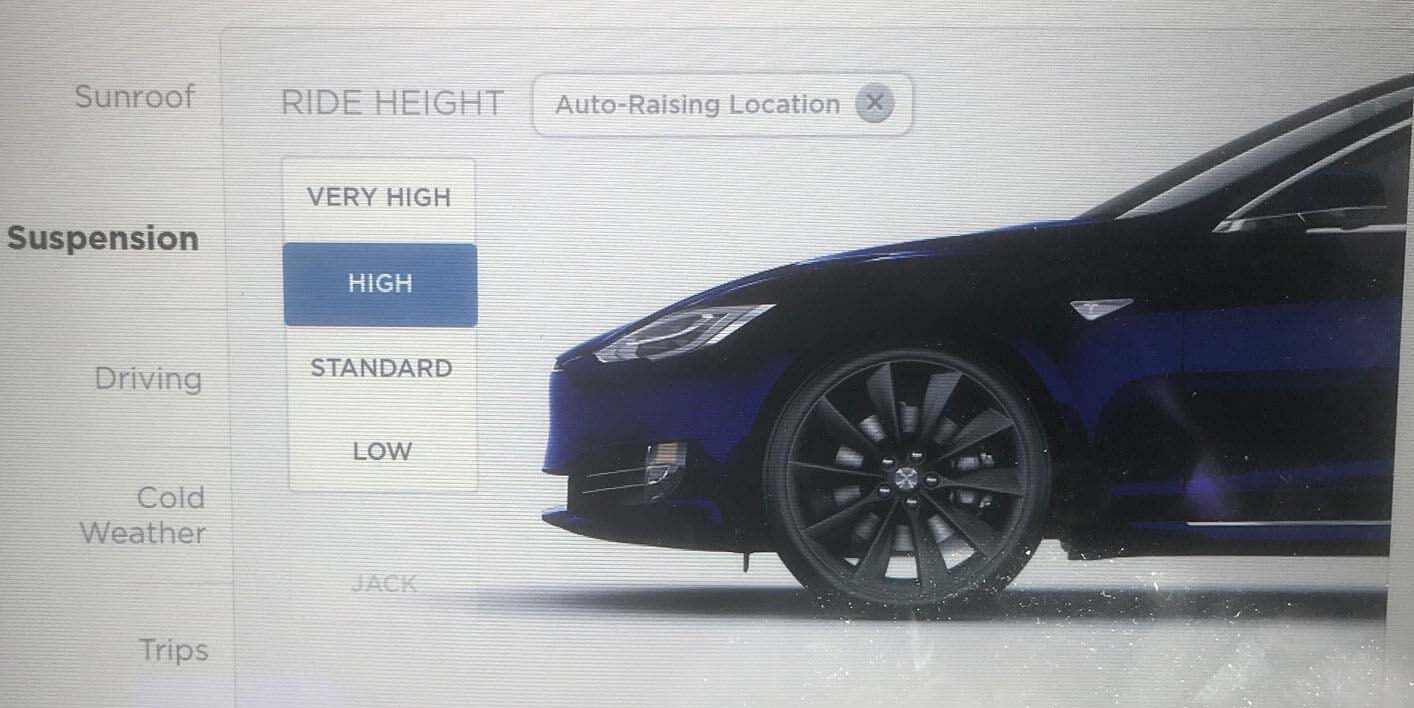 In 2019, as part of the "Raven" model, Tesla introduced an adaptive air suspension system.

This enabled the driver to control settings for Standard and Sport modes for a smoother or more sporting driving feel. Unlike the older Smart Air Suspension, the Adaptive Suspension is raised and lowered based on preferences rather than simply by simply selecting a ride height. The key change here is the car will determine what settings to apply based on the preference rather than blindly follow a specific height.

As previously mentioned, the quality of the coil suspension and the Smart Air Suspension wasn't massively different, the new Adaptive Suspension is a significant step forward in terms of ride comfort. The car still has efficiency gains at speed as a result of automatic lowering of the suspension at speed.

While Tesla push forward with software updates, like several areas of the car, the art of the possible is not just defined by the software but also hardware limitations. The ride is very good, but the speed of response, capabilities like magnetic ride and sway bars and body rigidity can all play a part in the suspension performance.

The Adaptive air suspension has been carried over to the 2021 update to both the Model S and Model X.

The main concern with air suspension is long term reliability and either air leaks or a failing air compressor. Like all air suspension systems, they can be expensive to repair in the long term. There's been no widespread reports of significant issues with the suspension so hopefully this is more of a potential worry than a material one, but when buying a used car, listen out for continual compressor noise which may indicate a leak, or for the car not to be sitting level.