The Tesla Model S has a recurring issue with the door handle, especially on the earlier cars which are now increasingly out of warranty. One of three faults typically occurs:

Tesla have performed numberous updates to the door handle design and there have been some improvements, however it seems to be a recurring problem for some owners and while rare, some owners have had up to 10 replacement door handles across the 4 doors of the car.

This guide explains those problems in a little more detail, tells you what parts you need if you want to attempt the repair yourself, point you to some detailed videos on how to do the repairs, and explains the costs v Tesla for a replacement door handle. 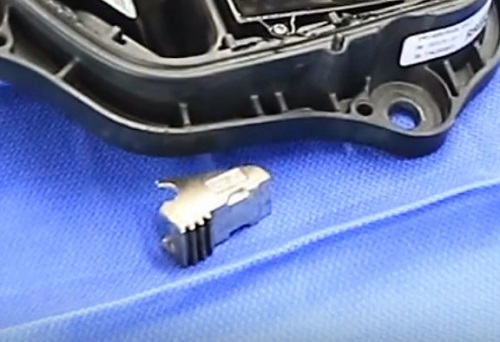 The Model S door handles are sprung to close and a small motor with a geared paddle pushes the handle out to present them. The version 1 paddle gear was unfortunately fairly brittle and could fail with the round part which sit on the spindle breaking resulting in the cog or paddle becoming loose. Depending exactly how it fails it can sometime twist and jam leaving the door handle slightly proud of the bodywork, or it just falls inside the handle mechanism.

Tesla have since revised he part and the revised part number is 1042845-00-B. This part used to be super cheap from Tesla, less than $2/£2/€2 but they've now increased the price to about $10/£10/€10. 3rd party companies also supply the parts at an inflated price which we don't believe is worthwhile. One on-line seller is quoting $80 for the part as their version is made out of stainless steel, we just don't believe this is warranted.

As an aside, because the door handle is sprung, you can leave your fingers in the door handle when it starts to close. Your fingers will get lightly pinched but no real harm should occur as it is a spring and not motorised mechanism thats pulling the handle shut. People tend to panic when the handle starts to close and pull their fingers out quickly which can pinch the tips and the shock is more than the actual pain.

As a temporary fix should this be the problem, looping some tape or cloth through the handle allows the handle to be pulled open and the door operated. 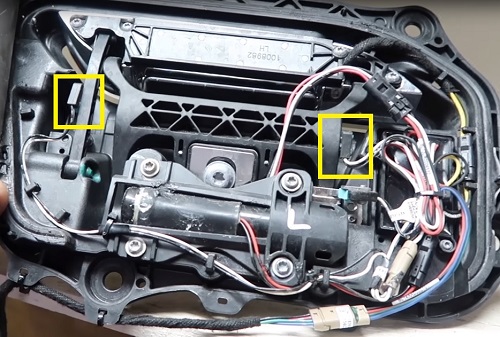 Tesla Model S doors, in fact all Tesla doors, are opened electro-mechanically. When you pull the door handle to unlock the door you are not mechanically releasing the door, you are actually making the door handle close a micro-switch which then triggers an electronic component to release the door. What can happen is one of the microswitches (highlighted on the picture) or the wiring coming out of it can fail and the signal either doesn't get created or doesn't get transmitted to where its needed.

You can buy a replacement mini wiring loom including microswitches, part 1016009-00-x. The latest version is thought to be E although it is worth checking with Tesla service if buying from them to match it with your particular age of door handle as Tesla have revised the mechanism a number of times. Online 3rd party sellers claim the ones they sell are cross compatible as they include an option to splice into the wiring loom if necessary. The wiring loom from Tesla is now approx $120/£120/€120. Some people try to repair the wiring loom themselves alhough it is difficult to repair some of the wires without risking a problem witht he moving parts.

Tesla appear to have changed the design on the latest versions to a hall switch (which uses magnets not a physical plunger). These may be more reliable but faults generally take time to emerge.

As mentioned the doors on Tesla open though an electo-mechanical process. In the even of a complete power failure in the car some doors can not be easily opened. The front doors are generally ok using the interior door handle, but the doors in the rear of the Model S requires the use of a emergency door release under the seat. The Model X has the emergency release behind a speaker grill and access is not easy. The Model 3 and Model Y have no emergency release mechanism for the rear doors at the time of writing. It is worth familiarising yourself with how to exit the rear of the car in an emergency.

There is a 3rd failure that some see which is more rare. This is where the door handle fails to retract after use. The door handle retracts due to a spring, it is only motorised to present the door handle. If anything restricts the handle over and above the power of the spring, the handle will stay extended, and this includes your fingers.

This blockage is one of two problems. Either the handle is catching on the wiring loom which has moved within the door handle. This can potentially be fixed just by securing the loom back in place, or a new, longer, wiring loom can be fitted, the instructions are the same for when doors fail to unlock. The paddle gear can also fail, become out of place, and restrict the movement.

Alternatively, the issue is because the door handle is not correctly installed and the handle is catching on the housing or part of the actual door. Adjusting the installation of the door handle can fix this problem without any parts. As a variation of this, if the cog has broken it may have jammed the location in the open position.

To repair or to replace?

A repair is not a trivial process as the door needs to be stripped down and the components replaced. There are plenty of videos on youtube talking through the process for this and we'd recommend the Rich Rebuilds videos.

If, having watched the video, you feel its a DIY task you can take on, then take your time. Even if not, you can consider sourcing the components and asking a friendly garage to do the work for you, expect an hour or so labour charge but the total cost should still be less than $300 - $350.

Some typical things to remember:

Tesla will charge around $500/£500/€500 for the part and a little under an hour to replace the door handle if you are out of warranty, and as they have increased the parts required to nearer $150, unless you are a DIY enthusiast the total cost of repair at a 3rd party is not going to save you a lot of money. Tesla are also on V3 of the design and an update to the new handle requires the car to be recoded. Because of the number of failures some have tried and been successful at forcing Tesla to do this as warranty work even when out of warranty as the part has a design flaw. The success of this depends on how lawyered up you are prepared to get and the consumer law where you are.