On Feb 1st, 2021 Tesla announced they would recall all cars with the MCU1 and pro-actively fix the eMMC issue with this hardware. This was after many complaints and private prosecutions by owners and we suspect more importantly by intervention from the NHTSA (US Safety board) who gave Tesla an ultimatum to do it voluntarily or be compelled to do it. Approx 135k cars will fall under this recall.

While this appears to be finally good news and can bring closure to this significant problem that has blighted many owners enjoyment of their cars, the "proactive" nature of the recall is anything but, and owners are having to wait for catastrophic failure of the MCU before Tesla will replace, although when Tesla do replace the MCU they do it at no cost to the owner. If you have not been contacted by Tesla regarding the recall, we suggest you continually report any issue with your MCU to Tesla to force their hand and not wait to be contacted thinking it is just a matter of time before they get to you.

The recall will sadly not provide redress to those that sold up or paid for the MCU 2 upgrade at considerable expense looking to simply avoid being left stranded by the failed MCU. There are also issues emerging with failing navigation data memory cards and similar chips in the instrument binnacle that are also causing failures. These are not covered by Tesla in the recall.

The Tesla Media Control Unit or MCU has been a significant feature of the cars since the Model S was first introduced. The original version is now referred to as MCU1 was updated in 2018 and is different again in the Model 3. Unfortunately, Tesla chose to make two mistakes which hurt the MCU1 badly, firstly they used cheap embedded Multi-Media-Card memory (abbreviated to eMMC) which has a finite number of write cycles, and secondly they left on excessive data logging that wrote to this memory. As a result the memory is constantly being over written and as a result will eventually hit the write limit and fail.

Tesla previously responded by adjusting the amount of logging the car performs. This however does not prevent the issue as many activities write to this memory including streaming music and while the reduced logging extends the time before the inevitable failure, this is actually a slightly cynical move pushing more of the failures to occur outside warranty. Tesla have now accepted the problem and have extended the warranty on the MCU1 eMMC issue to 8 years and 100k miles, whichever comes first, from date of first customer delivery.

What are the symptoms?

The most noticeable symptoms on the lead up to a permanent failure are:

Our guide to rebooting your Tesla talks through some other potential causes of the MCU crashing or rebooting which are worth exploring before jumping to the conclusion that your MCU is about to fail, although increasingly we feel even those issues are likely to be linked to the eMMC issue.

Do you have an MCU1 with the potential problem? 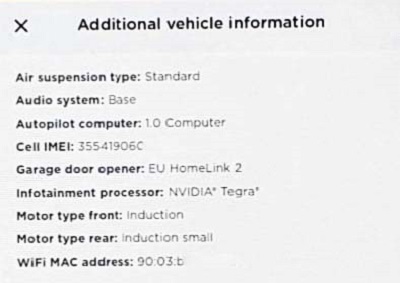 To determine the version of MCU in your car, the easiest way is to go the Software menu and then click on the "Additional vehicle information" text. A pop up will appear.

If the details presented indicate the NVIDIA Infotainment system as shown in this example, the car has the MCU1.

If you get any symptoms that indicate you may have a failing MCU then log it with Tesla through the app. Tesla sadly do seem to be deflecting a number of these issues, partly thought to be linked to general availability of parts, but they have become increasingly resistant to performing warranty repairs if they can be deferred. The concern we have with this approach is that a failed MCU can render the car unusable and if parts availability is low then your car can be off the road for some time. Tesla claim the MCU is not essential for safety and the car is usable, however the NHTSA in the US have chosen to disagree with Tesla on this. As a result we recommend pushing for replacement whenever you get issues.

The third party repairers we have spoken to also talk of a similar issue with the binnacle display and offer similar updates to this. Tesla are yet to acknowledge this as being a problem. The memory is smaller and the repair is cheaper, but it is still somewhat of an annoyance. This binnacle is also not upgraded as part of the MCU2 upgrade and so may require doing even if the MCU2 upgrade is purchased.

The other related issue is the memory card used to store the map data. This is an easier change although certain data files need to be copied across. We believe some of the falling performance of tbe MCU, especially with respect to the navigation routing calculations taking a long time could be linked more to the failing map storage than it is to the MCU itself. The MCU2 upgrade solves this problem.

As an alternative to the MCU1 repair, you could consider a MCU2 upgrade. Tesla have reduced the price of this although the final cost varies depending on whether you have the older AP1 hardware (which cannot be upgraded or the later Tesla autopilot hardware, and whether you wish to retain the radio module. Price vary from around $1500/£1400 to $2200/£2000.

The upgrade offers more functionality, especially with the Tesla autopilot hardware and it is only these cars where we would recommend this as an option. The older cars with the original autopilot hardware or before, while benefiting from a increase in performance, the cost of the upgrade is a disproportionate amount of money for the value of the car and the extra features delivered. That said, if you want to keep your car for a long time it may be a consideration.

One other consideration for owners of cars with HW2 or HW2.5 and thinking about the Tesla Full Self-Driving subscription, the MCU2 upgrade in many countries includes the upgrade to the Autopilot hardware (we recommend you confirm this with Tesla for your car in your area if you are thinking of taking advantage of this). Our understanding is this will avoid the necessary $1500 up front cost to bring the car hardware up to the required level of performance before you can take out the FSD subscription.

Removing Pin to Drive with a dead MCU

If you have pin to drive enabled and the MCU dies there is no way to enter the pin code which would ordinarily leave you unable to drive the car. There is a temporary fix to get you home or to a service centre. Disconnect the 12v battery for a short period of time and reconnect. You should find the car can then be driven. This is not a security bypass as if the MCU fires back up the P2D will be enabled automatically, it only works with a dead MCU.

Note: the ability for the car to charge can be compromised with a dead MCU and therefore this is only a temporary step to get you home, drive the car onto a low loader or a short trip to a service centre.