All cars have issues, and sadly Tesla is no exception. We set out below what we believe to be the most common issues with the cars and just as importantly, how Tesla are responding to the problems.

Tesla used to pride themselves on offering exemplary customer service, today the situation is more complex. The staff, generally, are willing to help but delays of up to 3 months to get an appointment, the denial by Tesla on certain issues and the refusal to accept design defects which in many countries would extend the warranty period beyond the formal period are now all common.

Tesla have always been bold with their 8 year and unlimited mileage warranty on the battery and drive train (with the exception of really early cars and a slightly different policy on the model 3 with a mileage limit). Its slowly being revealed that the warranty is not all that it seems, principally that the battery warranty is really only for a failure of the battery and not for a reduced amount of capacity. Batteries lose some capacity over time and on the model 3, they warranty it will always have 70% of the new capacity, there is no such limit on the Model S or Model X.

The 90 battery pack, especially the early ones, had some premature failures and had early degradation which almost reverted them to the model capacity below (ie that of an 85). In effect, you bought a 90D and within 6 months it was not too dissimilar to the 85D (there are a few other differences in the 90 battery's favour, but capacity is by far the main measure). They batteries were also throttled on supercharging resulting in a max rate of around 95kw as opposed to 120kw. Not all 90 batteries were affected by this, and the later batteries had the issues resolved.

The earlier 85 battery now have significant issues with Tesla reducing the available capacity of these significantly, up to 30-40 mile range is being removed. This is done through a software update by limiting the voltage the battery cells can charge too and thought to be in response to an increased fire risk. Tesla gave no warning they would do this, and not all 85 and early 75 batteries are hit by it, but many are. This is on top of the normal degradation of the battery so a car that once had a range of 250 miles could today be down to 180 miles which is right on the model 3 threshold for warranty replacement, but Tesla are refusing.

There is a related problem that the maximum charge rate on superchargers is being reduced for similar reasons. Some owners are not charging at a maximum rate as low as 60kw when previously they may have exceeded 100kw. All cars seem to have been changed to respond to ambient temperatures differently. Regenerative braking has been reduced significantly when the battery is mildly cold with cars taking longer to reach full regenerative performance in the winter in many countries and supercharging performance is similarly requires the battery to be in a more optimal state to achieve the fastest rates.

These combined issues can hamper long distance travel quite significantly requiring more charging stops and slower charging. Tesla largely deny these things are an issue and when issues are reported they run a remote diagnostic and tell owners the cars are working as expected. The two issues are known as #batterygate and #chargegate

The main screen in Teslas is called the media control unit or MCU for short. One of Tesla's supposed strengths has been the extensive information it captures about the car when you're using them, this information is used for a range of things but in general it's helped improve the product, diagnose issues and capture evidence in the case of abuse. Unfortunately, the very thing that is meant to be improving the product has a design weakness itself.

The MCU uses eMMC flash memory and if this is updated too often, and it can be updated constantly in use, it can eventually fail rendering the whole MCU useless.

It's suspected that the later version 2 MCU may have had this issue fixed or it may just be that it has a larger memory buffer and the logs are written across a larger spectrum of memory slowing down the issue, it's totally not clear. Its the older cars with MCU1 where this is an increasingly common issue with the car and likely because the failure is related to usage and time. Tesla are currently not accepting this as a warranty issue or defective product design even though this is on a par with the Apple Battery.

Quite a few owners report the heating element failing. They hear a loud pop in the cabin and the heating then stops working, the heating matrix has failed. It's such a common issue with Tesla cars, service centres are now holding stock of the part and the fix is relatively painless taking a few hours under warranty. Primarily a MX issue

Tesla are not accepting this is a design defect and if the failure occurs out of warranty they will charge you for the fix.

A number of Model 3s are experiencing the rear glass of the car cracking requiring replacement. There is typically no impact damage and the failure is thought to be a stress fracture from body flex in use.

Tesla typically deny the issue is the car is more than a few weeks old.

Tesla refuse however to acknowledge the part is a design defect and should be either recalled or replaced even when out of warranty.

A very common problem is the appearance of a yellow band around the edge of the screen. It's caused by the glue behind the screen failing and while the screen will require replacing, it still generally functions ok. Tesla originally replaced the screens but found these developed the fault as well. They now have a technique with a UV light which manages to change the colour back with reasonable (not always perfect) results. Whether the fix lasts is still unknown.

Tesla cars are heavy and the suspension can take some punishment. A number of faults can occur.

On full lock, in reverse, the front suspension pops apart and collapses. The car is un-driveable. Tesla have argued with a number of owners that they must have hit a pothole or otherwise damaged the suspension, but the failure scenario is all too familiar. Try to avoid full lock and reverse if possible, especially when it's cold and the suspension bushes are cold and more brittle.

Under hard braking, the front suspension arms have been known to simply sheer. Tesla again deny the problem saying any weakness will have been caused by accident damage. 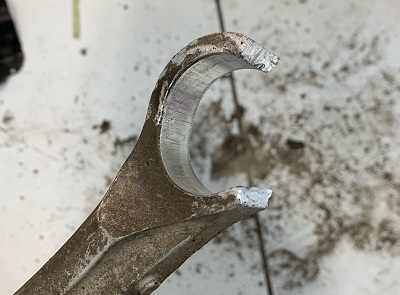 Water in the lights

This is an issue that occurs to many cars with led lights. Moisture gets in and eventually the light unit can fail. Depending how bad, Tesla will consider replacing under warranty, but if it's just a very small amount and only some of the time, it's just mild condensation.

The Cinch motor is the mechanism that locks the MS trunk and can fail. There is no easy fix if you experience a cinch motor failure, and the fault typically results in the car thinking the trunk is open even though it is partly closed and as such you can't open it and you can't easily lock the car. The work around to lock the car until you can get it repaired is to simply lock the car from the driver's seat with the driver's door open via the big screen (click on the padlock). It's inconvenient but not as inconvenient as leaving the car unlocked.

As mentioned elsewhere on here Tesla have parted with Mobileye, the company that provided the original autopilot hardware and a high degree of the know-how. AP2/EAP. Teslas attempt without Mobileye is lagging behind, and full self-drive is anybody's guess. Nobody really knows what the target feature set is for any of these versions or when it will be delivered. What we do know is that the AP2/EAP version needs a lot of care when using, and it's sad that there are increasing numbers of reports that the original AP is actually getting worse rather than better. As a result of past fatal accidents, the cars are now very sensitive to bridges over motorways and the cars have been known to slow down sharply on the approach to a bridge on the motorway resulting in the potential for a rear-end shunt.

Tesla are also using regional approvals as an excuse for not rolling out features. We fully accept that features developed and implemented in one country and not available in another is likely to be a legislative issue, but Tesla are known for not engaging with legislators which even if the software was fit for purpose would hinder the legal approval process.