In many respects driving an electric car in winter is like driving any other car. The same laws of physics apply to ice, grip, traction, steaming up, freezing stuck, etc, however there are a number of differences that drivers should be aware of irrespective if they are driving a M3, MS or MX. 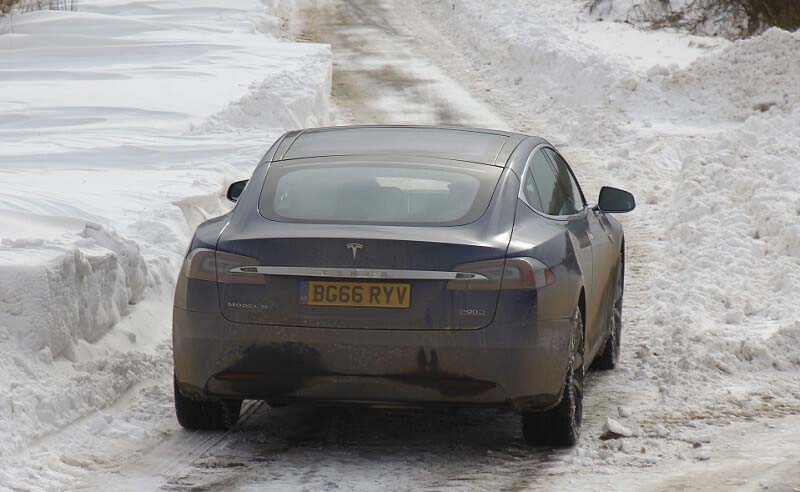 We set out the key points for Tesla owners of all models including:

Range is limited considerably in cold weather especially at the beginning of a journey. Unlike a petrol car, an electric car does not create a lot of waste heat that can be harvested to heat the battery and the cabin. Cars are also effectively metal boxes in a 60mph wind tunnel and require heaters to keep things warm even when up to temperature.

Heating the cabin can decrease range significantly (10-30%) due to the use of the heater and heated seats. The more efficient the car, like an M3, the more noticeable the required heating effect can be.

Similarly, the battery can require heating, if not through a physical heater through increased internal resistance of the battery which in effect creates waste heat in the battery to warm it up. If you see a blue snowflake icon beside the battery icon it's because it's very cold. It will clear once your battery reaches a minimum temperature.

There is no magic way to remove the need for energy to heat the car, but if plugged in to a charger, preconditioning the car before use (see below) will draw the required energy from the charge point rather than from the battery leaving more available for the journey.

Charging the car to finish charging just before departure does result in the battery being a little warmer than it would otherwise be, and every bit helps, but the car needs to be charging for some time to build up any heat. If you get the start time wrong, the downsides of an under charged battery outweigh the potential benefits of a small amount of warmth from the charging finishing just when needed. Tesla have introduced a feature but this cycles the charging in the night and appears to want to utilise cheap electricity tariffs more than having the car in an optimal state for when you set off. They could just introduce a manual battery heater option if they wanted to deliver the latter.

It is not uncommon for people to see range as low as 50% of the expected range in winter. The worst case scenario is when the car is used for lots of relatively short journeys where the car cools down again before the next journey. This is also true for charging, especially supercharging, where the cold can limit the maximum rate even after a long drive where the cabin feels nice and warm. The battery may still be relatively cold. There are a number of issues which can reduce charge rates and owners can be concerned that they may be experiencing such an issue, this may not be the case in cold weather. If concerned then we suggest keeping notes on max charge rate, soc at the time, whether you are sharing a supercharger location, and using some of the tips below to see if it could simply be the cold.

Heated seats are more efficient that a hot cabin

Regeneration and charging with a cold battery

A cold battery will be most easily recognised by a dotted line on the power meter below zero. The dotted part of the line indicating that area is not accessible. Tesla appear to have become more conservative on the amount of regen possible in the cold, and less regen appears possible to how cars were a few years ago. As the battery warns up, more regen will be possible. It's important to recognise that reduced regen also means reduced braking and more application of the brake pedal will be required to stop. This can feel unnatural and very different to normal and the first time it is experienced it can feel like the brakes have failed.

Reduced regen is a limit on how fast Tesla thing the battery can safely take. Charging is exactly the same. Most domestic/AC charge points work at under 11kw and except in extreme cold conditions, this is rarely limited. DC charging however can be limited in the cold and 30kw or less even on a supercharger is possible. As a result charging a cold battery on a super charger can be a frustrating experience.

To reduce this problem, supercharge at the end of a journey rather than the beginning if possible, although be mindful not to charge to 100% and then leave the car.

If planning to supercharge en-route, select the supercharger as the destination. If the SoC battery is sufficiently high, the car will precondition the battery to be at the ideal state upon arriving at the charger.

If you have a car with ludicrous, selecting ludicrous_ will also heat the battery

Be careful of limited braking until warm

The role of preconditioning

As has been suggested above, preconditioning raises the temperature before driving reducing the amount of energy required from the battery once travelling.

Preconditioning can be triggered a number of ways, either scheduled or the easiest way we believe is simply to use the app 30 mins before departing. Turn on the features you require including heated seats and windscreen.

Preconditioning does not however automatically warn the battery and there is no easy way to manually turn on the battery heater, the car will turn the heater on if it feels it is required. (Technically cars with ludicrous can turn on battery heating by selecting ludicrous+ in the car but this is not advisable and not what the feature was designed for.). You may see a battery with a snowflake appear on the app display if the car feels the battery heater is required.

Preconditioning for charging can be achieved by setting the supercharger as the destination. Given a sufficient amount of time and power reserve in the battery, the car will warm the battery to the optimal state for charging.

Autopilot and the dangers on ice

Autopilot and traffic aware cruise control (TACC) aim to maintain the car at a steady speed. If the car is going up hill it will naturally slow down and the car will provide more power to the motors to maintain the speed. This is perfectly normal and as expected. Problems can however occur if the car is driven on ice or other slippery condition, including deep water, where traction with the road is lost which cause the car to slow down. If TACC is engaged, the car will increase power in the same way it would increase power if the car slowed due to a hill. The increase in power can cause the wheels to spin and traction is further lost creating a vicious circle resulting in the car spinning out. This is not an issue unique to Tesla but still one to be mindful of in winter.

Regen can also cause the wheels to lock up on ice and it is counter intuitive to apply a small amount of acceleration to overcome the regen to enable the wheels to turn again and regain control. If in doubt and in extremely icy conditions consider setting the regen to low.

We have not tried to address winter tyres here. In many countries winter tyres are a routine part of car ownership and the need for them varys by location. Teslas are often all wheel drive and the traction control systems are very good, these typically help primarily with acceleration. Physics and the weight of a Tesla, especially the MS and MX, still plays a significant role in the ability (or inability) to stop and corner so don't be fooled into thinking that the ability to pull away also means it is easy to stop.

Winter tyres can be mandated in certain countries

If using summer tyres in the cold (below 7C), be aware the grip is very poor until they have warmed up through use. In very cold conditions they will not warm up satisfactorily in use.